No Corn Flakes for Breakfast

Our day began in Denver, Colorado at 7:15 am where we jumped from bed to the bus and motored onward to Kansas. With a 3-hour drive ahead, and a tired group of hikers, there we many z’s caught along the way. After traveling from mountain to central time zone, everyone was pleasantly surprised to see the golden arches. With everyone perked up from coffee and burgers, we hit the road for the first stop of the day.

It was sunny and windy when we arrived at AgSun LLC in Brewster, Kansas around 1:15pm. Phil and Sharron Knox warmly welcomed our group to their multi-dimensional business. After providing us with an overview of the corn flaking production process, we were split up into four groups and rotated through the different aspects of the plant. Everyone was able to gain a detailed understanding of the starch availability benefits of flaked corn feed for both beef and dairy cattle. The opportunity to walk through the process allowed us to see the transition from corn in storage to flakes ready for shipment. After observing their management techniques and the stagnated succession plan, we became more aware of the challenges surrounding labour in rural communities. The Knox’s sent us on our way after providing us with delicious cookies and sweet tea.

After the mountainous views in Denver, we were surprised by the incredibly flat plains from Brewster to Oakley, Kansas. Upon arriving at the Buffalo Bill Cultural Centre in Oakley we were reunited with our class’s mascot, the Buffalo! This brief stop gave us insight on the wild wild west. With our day coming to an end, Kenny found us yet another buffet deal where we stuffed ourselves with all sorts of starch. 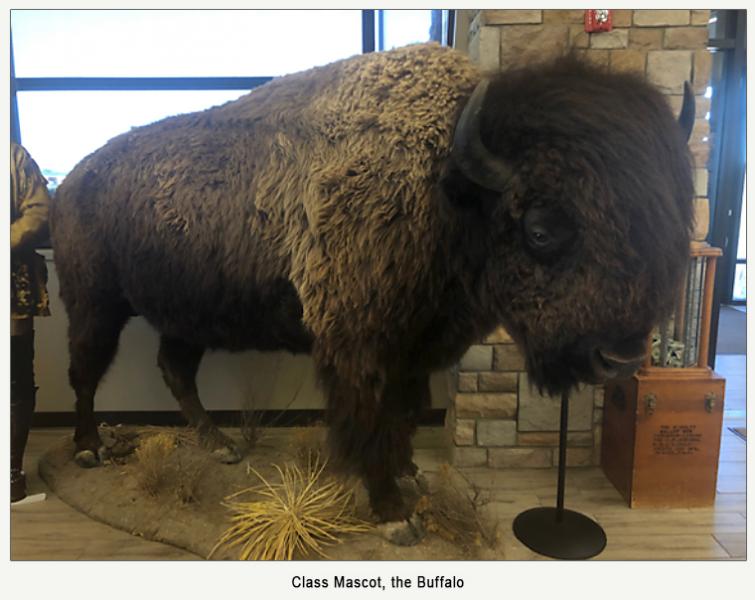 Stop of the day: AgSun LLC

Phil and Sharon Knox founded Ag Sun LLC in 2004. They have a strong value-added focus, as they heavily vertically integrated a business consisting of workable land, a feed mill, cow-calf operation and feedlot. With 6,000 acres of corn, 3,000 acres of cereals and 2,000 grasses AgSun utilizes their corn flaking facility to add value to their crops. The flaked corn is then used in the feed rations for their cattle and shipped to customers up to a 150-mile radius.

This operation sources its water from the city which is located above the Ogallala aquifer. Similar to Rich Uhrenholt’s cropping system in Nebraska, Phil utilizes irrigation from this aquifer. Their water usage is regulated by the state due to decreasing water levels which has resulted in lower water pressure for the plant. The management practices between the non-irrigated dryland and irrigated land, vary significantly. The planting population on dryland is between 16,000-18,000 plants per acre while irrigated is 30,000 plants per acre. The lower inputs on dryland result in yields of 80-90 bushels per acre whereas the irrigated land averages yield of 150-160 bushels per acre. Despite the yield differences, the profit margins are higher for drylands due to the lower input costs.

The main benefit of flaking corn is increased digestibility because the walls of the kernel are broken down, improving starch and energy uptake. This directly correlates with increased milk production for the dairy farmers and more efficient weight gain in beef cattle. Flaked corn in cattle rations also decreases the amount of excreted starch in manure by about 10%. The process of flaking begins by wetting the corn to 18% moisture, then steaming up to 207 degrees Fahrenheit. The corn is then pressed in a roller mill, deposited on a conveyor belt which brings it to the aerated flake storage. From this storage, it is loaded onto a truck by a front-end loader and shipped to the customer who then feeds it fresh to reduce spoilage. 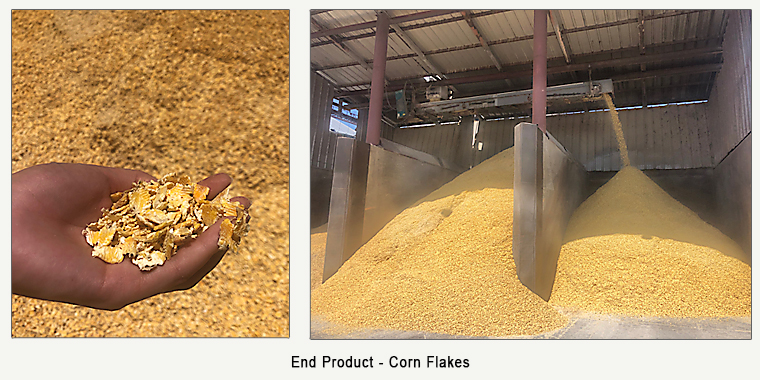 AgSun is a community-oriented business which aims to positively impact the local community. Long term employees spoke thankfully about the family-like work environment, where they are trusted with responsibilities regarding their specific sectors. AgSun has started to develop a succession plan, however, there is a lack of implementation thus far. They have knowledgeable employees who have helped make the corn flaking business a sustainable success for the past 15 years which they hope to maintain for years to come.

Succession planning is a key issue at most farms and businesses as current owners are trying to plan who their predecessors will be. At AgSun, Phil was hoping to follow a similar succession plan to when he took over the family farm from his dad. He was not pressured to come back by a certain time, even when he was the only sibling interested in the farm. However, his succession plan for his children will not follow the same path. He has one daughter and one son who have moved away and are not interested in the business and another son who in unable to farm due to a medical condition. Phil’s current plan is to hire a full-time manager to shadow him to understand and learn the crop, beef and flaking plant operations. This will ensure job security of the current employees of AgSun and the farm.

Phil and Sharron continue to give more responsibility to their longstanding employees so they can become more hands-off. This relates to the family-like mentality of their operation and how they trust and empower their employees with important roles. This differs from most situations as the family business or farm would be left to the children regardless of their personal involvement in the farm or business. Dave Nichols also showed great trust in his employees as he placed them in high responsibility situations. With this trust he is willing to hand his business down to an employee rather than to family. Dave Nichols and Phil Knox both hired someone to manage their businesses to people that had previous experience in the agriculture field. Dave hired Ross Haven to run his cow-calf operation, while Phil Knox hired Don Allen to be the manager of AgSun. However, the Whetstine brothers had a more traditional succession plan on their family farm, as both Larry’s shares in the sow barn and his land will be passed down to his son Clint. Similarly, to the Knox’s they have also hired a full-time manager to run a part of co-operative operation that they own shares in. All three of these agricultural businesses have successfully hired a full-time manager that they entrust with day-to-day managing operations and input on larger business decisions. 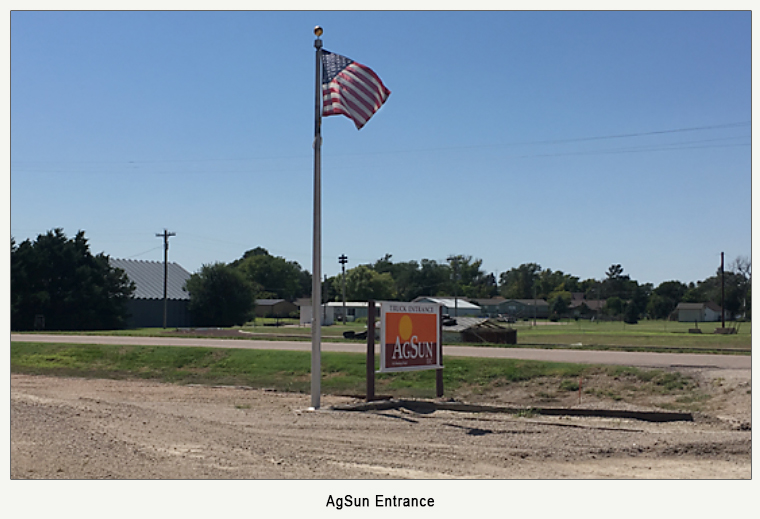 The hardship of the 2019 spring was summed up by Jay Wolf from Wagonhammer Ranch as the year from hell. Although Phil noted that in Kansas this year, they had an above average rainfall and thus his dryland corn yields may be very profitable.  In an average year, corn grown on a dryland cropping system can be very profitable due to its low input nature yet struggles in producing high yields due to less water availability. To add an additional value-added profit, AgSun could increase their flaking production by reducing the amount of corn bought in. This contrasts to Wagonhammer’s spring 2019 experience of the largest flood in Nebraska history. In their area the Ogallala aquifer is closer to the soil level and therefore the excess rain had nowhere to drain. Wagonhammer was negatively impacted due to washed out roads resulting in cattle who could not be fed. They weren’t able to mow hay in their meadows and were then forced to buy $105 000 worth of hay for feed. They also had cattle stranded on pasture hills for extended periods of time. Finally, they had to go into their pastures to retrieve bulls for their spring sale via horseback. Similarly, at home in Ontario and at the Whetstine Brothers farm in Iowa, excessive rainfall in the spring pushed planting dates five to eight weeks later, compared to a normal year. In the areas of crop production, we have seen on this tour, Kansas may be the only state in which they have positively been impacted by the excess in rainfall.

Both Rich Uhrenholdt, who showcased his irrigation practices in Nebraska, and Phil, irrigated their land with an average of 12 inches of water per year. Although the aquifer level is much deeper in Rich’s area compared to Phil’s, Rich showed a greater understanding on the importance of the aquifer and maintaining it for future generations. Rich has observed and learned from business owners in areas of low water levels, to prevent mistakes in his own county. Phil has taken a different approach by focusing on dryland agronomy since it has worked in the past, while improving the system by practicing strict no-till for moisture conservation. In Nebraska, the Natural Resource District was created to tax and regulate the water usage by farmers. They have the authority to put water meters on all wells and can limit usage by farmers who abuse water usage regulations. These standards are similar in Kansas, but enforcement is more lenient. Phil mentioned that if a farmer uses excess water in a year, they will be warned and then repercussions will follow if they continue to abuse their usage rights. This is counterintuitive to areas with less water availability from the Ogallala aquifer, which should be more strongly enforced. Nebraska is a forward-thinking state, which is strictly managing water in a sustainable way to prevent a water shortage crisis in the future.