Hatcheries in a Nutshell

Day 11 of the 2019 Midwest Crop Tour began at 7 am when the bus departed from Joplin, Missouri. From the hotel we made a quick hour bus ride to visit Chesapeake Fish Hatchery in Mt. Vernon, Missouri where Brody and Allison chatted with us about the fish hatchery. Everyone was eager to learn about the hatchery process and what the goals of the operation are. From Mt. Vernon, we travelled onward to Orleans Trail Restaurant in Stockton, Missouri for a delicious lunch provided by Zayn and his wife. Some got a refreshing dip in the lake, and a quick look at the carp swimming by the docks, before we headed into town to visit Hammons Black Walnut Facility, the world’s largest producers of black walnuts. A unique aspect of this stop is the hand-picked harvest conducted by numerous surrounding communities, as the crop is only grown in wild trees. With this being the first ever visit to the Hammons facility we were warmly welcomed by Brian, Tom, Steve and Josh. Following the tour Josh joined us on the bus for a short trip down to the Black Walnut Emporium where we all enjoyed a delicious, black walnut treat.

We filled ourselves with rich walnut ice cream before our long haul to Poplar Bluff, Missouri where we visited TNT Western Store. We were welcomed into the store by Tim and his daughter for an after-hours shopping spree.

Allison and Brody are both employed by the Missouri Conservation Department and work directly with the fingerlings in the hatchery. The Chesapeake Fish Hatchery was founded in 1927 however, was not in complete production until 1930s and was renovated in 1984 to the facility we saw today. 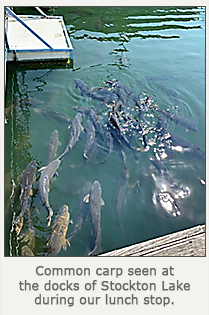 The hatchery sits on 113 acres of land, only 40 acres is the ponds and the rest of the land is used for wildlife conservation. On average, there are 9 million fish produced at the hatchery, 5 million are stocked out to lakes and rivers.

One of the main focuses at the hatchery is to produce fish for sport fishing, a major tourist attraction in the Ozark region, in order to maintain the natural population of these species in the Missouri waterways. Each year the hatchery receives funding in return for their efforts to balance the fish population and sustain Missouri’s tourist economy. Brody spoke to the fact that many people travel to the Ozarks for summer vacations which is the largest contributor to the economy. Allison and Brody also spoke about the educational presentations they provide, such as the one we received today, which they can use to apply for reimbursements from the State of Missouri to ensure the continuation of these programs that provide information to public regarding fisheries and the importance of maintaining them. Allison was very interested in discussing the environmental impacts we can reduce and said that is a main topic of discussion during her educational tours. The funding that is received is primarily from fishing licensing in the state and some tax payer dollars, with this they can continue to maintain the populations of blue gill, hybrid sunfish, channel catfish and large mouth bass. In order to remain sustainable, they use any extra fish inventory to feed the fish they overwinter.

With the funding received from supporting the economic growth of the Ozarks, Brody and Allison have been working to increase populations of predator fish such as Alligator Gar that will prey on Asian Carp. This effort helps to reduce the amount of Asian Carp in the waterways and the impact they have on the local environment. 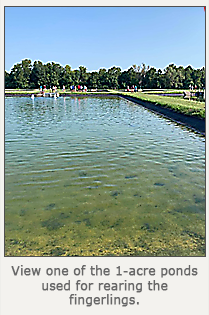 Allison and Brody have also discovered the use for Grass Carp which were known to be a nuisance, however, they will feed on hydrilla plants which is an invasive Asian plant. It takes 7 years to destroy the plant completely, and they control the population of the invasive Grass Carp by subjecting the fertilized eggs to hydrostatic pressure treatment to create triploid fry. Triploid fry (infant fish) are sterile and unable to produce spawn, this will increase their growth as they do not need energy for reproductive organs. They strive for over 90% sterility; however, they are one of 7 states that are still allowed to release diploid Grass Carp.

Being a fish hatchery, lots of water is required to produce healthy fish in the outdoor ponds after the fish have spawned. Brody discussed the hatchery’s ownership of the natural spring that is on site, that is used exclusively by them. Every year the pond is cleaned out and the fish manure is transferred to a settling pond where the manure settles to the bottom and the remaining water is released back into the Chesapeake Creek. Essentially, the hatchery is temporarily using the spring water, that will inevitably end up back into the waterways, to produce fish every year until they have harvested the fish. The settled manure is used for food plots that the conservation department maintains to increase the population of deer and turkey in the area. On site, there is a 4-acre pond that they call their “solar pond” where the water is warmed naturally, so that they can regulate the temperature in the ponds for ideal water conditions. They also have 2 wells on site, that are utilized in the event of a dry season, these wells can pump 300-400 gallons of water per minute. They try to only use these when absolutely necessary, the last time being 2012 when there was a heavy drought.

We arrived at Hammons shortly after 1pm and were introduced to their president Brian and his colleagues Steve, Josh, and Tom. Hammons Black Walnuts is a family operated business extremely passionate about Black Walnut products, with Brian being the 3rd generation to be involved. Stockton, Missouri is the black walnut capital of the world. It all began in 1946 when Brian’s grandpa, an owner of a grocer business, had the opportunity to expand into black walnut buying, he purchased a black walnut sheller, which started the respectable world-leading business that exists today. On average Hammons’ shell 23-25 million pounds of black walnuts per year, with only 6.5-7% of that being the actual nut meat – that’s nutty!

The Stockton community is a huge contributor to black walnut harvest as they are harvested from wild trees in pastures and residential properties. There is some orchard production, however this is not the primary resource for black walnuts. Interestingly enough, the main drive for harvest happens to be mostly retirees, who in their spare time, collect walnuts from the base of trees. 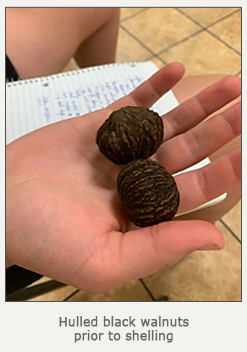 They have worked to try and get younger people involved in harvest by introducing a competition to FFA (Future Farmers of America), in which the different clubs compete against each other for a contribution to their chapter of $2500. In the processing plant, they hire about 75 employees year-round, however, their overall labor force is composed of thousands of individuals across the eastern United States, willing to harvest.

Hammons Black Walnuts has a controlling share in the black walnut business as there are no other processors to their scale in North America. In order to remain economical in their production, they aim to use the entire black walnut, including the shell for numerous by-products. Hammons has 230 buying stations in 13 states, with two-thirds of the stations residing in Missouri, each station averages 120,000-130,000 pounds (wet weight) of black walnuts per year. Missouri has the optimal climate for black walnut production as the climate is fairly temperate with all 4 seasons. Although black walnuts are quite a hardy nut, they do prefer the milder climates. From the buyers the black walnuts are brought into Stockton for storage, Hammons always ensuring they are stored in a dry climate to prevent spoilage. In cold storage, black walnuts can be kept for 2-3 years without any damage to the meat. The black walnut must be dried down to about 4.4% moisture before the shelling process can begin. At this point the meat is removed from the shell through a steel roller, the shell of the black walnut is used as a by-product for many other industries. The markets for the shell by-products include; water filtration, oil wells, indoor soccer sod, and metal polishing. About 40% of their revenue is from the black walnut shell and 60% is from the meat of the black walnut. Black walnuts are not considered a snacking nut but rather an ingredient used in fine cuisine and baking; this alters their marketing strategy.

Hammons have determined that there is 57% more protein in black walnuts than English walnuts, this is also a large market they have yet to tap into with plant-based proteins becoming much more popular. Black walnuts also contain omega-3 fatty acids without cholesterol which will attract the health market to this product. Hammons is always looking to expand as they believe there are many areas with black walnut trees that are not being harvested. Another selling strategy for these nuts is their sustainability due to their wild production, with little need for extra water and guaranteed annual production for decades. Josh has been working on improved varieties, to hopefully see an increase in processing so that they have capacity to enter into some new market territories. They have tried these varieties in their own orchards, however, this is a fairly slow process since the trees take approximately 8 years to produce. 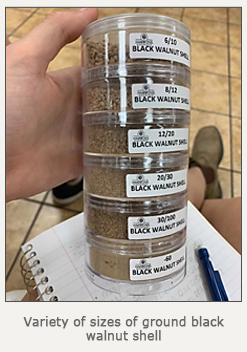 Since Hammons is a family-owned and operated business, succession is a large piece of their operation. Brian is the 3rd generation to be involved in the business coming from a background as an attorney. He spoke to the group about finding talented, educated individuals to be involved in the business and shadow some of the upper leadership team. He is looking for potential successors to have a higher education level, such as graduate school. Brian said he still has about 10 years before he will be seriously considering transitioning out of the daily operations of Hammons. Brian is excited that the 4th generation has joined the operation; his nephew Jacob has been involved in the marketing team since joining the family business. The interesting perspective Brian shared with us was his willingness to have a non-relative step into a leadership role in the future, if his children choose to only remain shareholders.

Since we have visited numerous drylands cropping areas over the course of this tour, water usage has been a constant point of conversation, especially in those highly irrigated farming areas.

The depletion of the Ogallala aquifer is a major concern in some areas of the United States, after talking with Bill Kranz about water ethics we gained a larger understanding of this necessity. It was interesting to learn how the hatchery is utilizing the water they have access to; they are using the water with the mindset that they are only using it temporarily with full intentions of flowing this water back into the creek. Black walnut trees are also very sustainable since they do not require any extra watering for growth and production. With Missouri having less row crop farming opportunities compared to other areas of the Midwest, operations such as Hammons and Chesapeake Hatchery are crucial to the economy and agricultural infrastructure of state of Missouri.

Many of the businesses we visited were in the process of completing a succession plan for the incoming generation. Succession planning is crucial for any business to ensure the success and growth for the years ahead. At Hammons, Brian explained that they want the family to maintain ownership, however, would be open to bringing in new talent for leadership of the business. This has been a trend we have seen over a few stops, as Phil and Sharon from AgSun were also outsourcing a managing individual for their business in the near future.