Today is the third day on the 2019 Midwestern crop tour. We arrived at the Quality Inn in Peoria, Illinois yesterday afternoon. This morning we had a bit of a later start with a continental breakfast offered by the hotel, as well as our first stop coming to us! At 8:30 Kevin Brooks, farm manager at BK solutions came to our hotel to speak to us about the US Farm bill. He began by saying that they are “complicated, frustrating and hated, but farmers don’t want to live without it”. 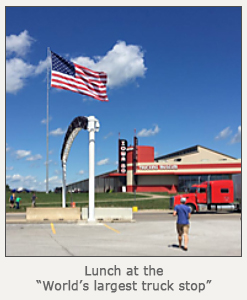 He explained why the farm bill was created, how the programs work and how it connects to the US market. Once our presentation was over, we promptly left the hotel and set off for the world’s largest truck stop for lunch! Everyone got a chance to stretch their legs and had lots of options for food. The location also had a truck museum to learn about trucking through the ages. On our way to the next stop we only missed one turn, and still made it there on time! We made it to the Whetstine’s diverse farming operation in Wellman, Iowa at 3:00. Brothers Ed and Larry as well as Larry’s son Clint, kindly welcomed us to their swine, beef and cash crop family farm. Here we learned about the family’s succession plans as well as their farrowing cooperative that they started together along with local swine producers. While we were there, we got a change to see the pigs and cows, ask lots of questions and got a hay wagon ride. Before we left, we even got cookies and lemonade! Tonight, we are all going out for a supper buffet and then checking into the Baymont inn in Des Moines, Iowa.

The US Farm Bill – Friend or Foe…

To completely understand the farm bill, you need to understand why they’re applied in the first place. For this reason, we spent the majority of the lecture talking about the current US markets. Since corn is king, we started off with U.S. Corn Production. Over the past few decades, American farmers’ corn yields have increased fairly steadily. This is true with some exceptions; 2012 was a big drought year that greatly affected the corn producing Midwest states. The USDA estimates that planted corn will cover 91.7 million acres, however, Brooks believes there may be some unplanted acres that aren’t accounted for. This could potentially skew the predictions for corn prices. Similarly, the amounts of corn used in the United States has steadily been tending upwards, especially in the mid 2000’s due to the massive increase in ethanol plants. In the past few years the trend peaked mainly due to the plateau of ethanol demand. Today’s vehicles are far more fuel efficient and the current population is looking for alternative ways to commute. As vegan and vegetarian trends become more popular, meat consumption has decreased which in turn, leads to a lower demand for grain needed to feed livestock.

Similarly, soybean production trends have been increasing except for last years’ growing season. This is due to trade wars between the United States and China, the previous largest importer of US beans. Without the Chinese trade deal, the soybean exports have declined by about 400 million bushels in 2018. Negotiations are not progressing and therefore, exports are continuing to decline. In turn, for 2019 the USDA estimates 76.7 million acres will be planted with soybeans.

At this Point, Brooks began to explain the allocations of the farm bill. Conservation expenditures stayed relatively consistent excluding the Conservation Reserve Program (CRP) whose funding is declining. 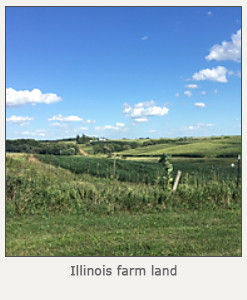 The CRP is the land that farmers take out of crop production in order to enhance environmental conditions. To be eligible, this land must be in a sensitive environment, such as waterways or hills and will be turn into something that will positively impact the ecosystem. Examples would include grass ways or cover crops. We learned about different agricultural risk programs within the farm bill. There are three main coverage options to choose from; Price loss coverage (PLC) and two branches of agriculture risk coverage, one based on a single farm (ARC-IC) and the other based on county averages (ARC-CO). During this farm bill, the majority of US farmers chose ARC-IC as it is solely based on their own farms’ production. This, however, may not have been the right choice following the 2019 season. Kevin implied that PLC may have been the best option now knowing the market outcomes. ARC-IC is determined through a 5-year average of the individual farms yield and provides 65% coverage of commodities. PLC, however, covers farmers if the market price becomes lower than a certain price. Currently the benchmark price for corn is $3.70 and $8.40 for beans. The current prices are below the benchmarks which makes PLC more profitable.

Federal crop insurance can be applied for on a county or individual level. Individual crop insurance is based on your rolling average yield. This is the more commonly chosen option. Although it is called a “farm bill”, the majority of the money goes to food stamps, 5% goes to the commodities, 6% towards conservation expenditures and the remaining portion is allocated to crop insurance subsidies.

Kevin’s presentation allowed us to connect what we learned at the Chicago Board of Trade about commodity markets and the current low prices as we were able to see how the farm bill reflects the corn and bean markets. We can now better understand what impacts and creates prices. It was made clear today that the farm bill is extremely political. An example mentioned is how North Dakota is a main driver of agriculture subsidies as they are a tight knit community and are able to sway their two senators. Understanding these topics will help us better our understanding of many agricultural subsidy programs in Canada and the politics behind them.

Hog Production in the Hawkeye State 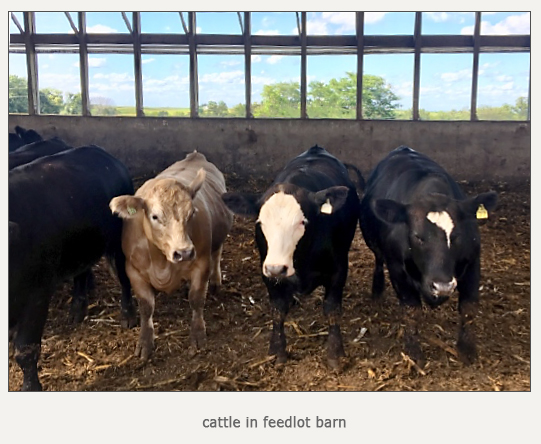 Our second stop of the day was the Whetstines’ farm, just outside of Willman, Iowa. It is run by two brothers over the age of 80; Larry and Ed as well as Larry’s middle-aged son, Clint. This family has welcomed the Aggies to their farm for many years, its actually the oldest tour of the trip! *pic

During out stop, we were given the opportunity to see their livestock and crops. We talked about their diverse operation of hogs, beef cattle and cash cropping. Not only are they farmers, they are the founding members of a co-op responsible for providing local farmers with piglets to finish.

The largest part of their operation is their hog finishing business, run mainly by Larry and Ed. They currently finish 12000 hogs per year in 4 different finishing barns. They receive piglets twice every 9 weeks with an aim to finish and sell 3 rounds of hogs per year. This operation is unique due to how they source their piglets. The Whetstine’s do not own any of their own sows as they are all a part of the cooperation. Their co-op is an independently managed farrowing operation that provides piglets to all 13 members for them to finish. This allows co-op members to produce hogs while having a reliable source of weaners. The founding of this co-op allowed for the shareholders to expand their operations without full start-up costs. With the high-quality management of the facility, the members were able to pay it off three years faster than expected.

To feed the hogs, as well as their herd of cattle, the Whetstine’s run approximately 1000 acres of corn, soybeans and some hay. This provides not only feed for the hogs and cattle but also provides another aspect of the business for the next generation and gives the opportunity for some extra money to be made when yields are high. Clint, the main man when it comes to the crops, and is always willing try something new. It was fascinating seeing the difference between the corn planted in April compared to the corn planted in June, illustrating the struggles experienced by Midwestern farmers this spring. It also provided an example of the American Farm Bill at work as they had acres they were not able to plant and received prevent plant compensation.

Land prices are currently increasing in the area, ranging from $5500 to $12000 an acre which makes it hard for the operation to expand their land. For this reason, when Clint wanted to return to the farm, they had to find other ways to increase farm revenue. One of the ways they do this is through their beef cattle business. They currently run about 100 head at a time, finishing 200 a year. The cattle provides another way for them to add value to the corn they grow, producing higher margins.

A key take away we see from this farm is the value of diversification. In the Midwest, many farms are just cash cropping, but the Whetstine’s diversity in their operation has allowed them to continue farming. We also learned the value in a co-op structure as it allows local farmers to specialize and pool their resources to their benefit. This is a message that hits home as many students that are part of a co-op, either as members or through work. This led to discussions about the possibilities of starting co-ops in Ontario, how it could value members and its potential value in emerging niche markets. Our last take away from this farm is the importance of succession planning. Both Clint and his father, Larry, were very open about their process of succession. They highlighted the importance of having those hard conversations to ensure that the farm will continue to prosper in the future, a message that applies to many of the students that were present. Larry and Clint encouraged students to begin having conversations with their parents back on their home farms about the future as soon as possible. 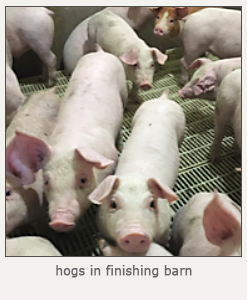 Being able to learn about these two topics today allowed us to make connections that we may not have understood before. This morning we were taught how crop insurance is determined and distributed. This afternoon we were able to see how it effects the farmer directly. Clint’s June planted corn which dried out in the summer months is not as profitable as a normal year. He may have to rely on crop insurance this year. Interestingly, since the farm is located on rolling hills their crop insurance rate are approximately 10 times higher than the farms with more productive soil with flat topography. Both of our stops today touched on the theme of farm succession. It was interesting to hear the opinion of both farmers and an economist on this topic. Both stressed the importance of early succession planning so that management decisions can be made to keep all parties satisfied. This directly applied to many students wanting to return to their family farms. This morning, Kevin explained how the US farm bill adds value to the farms. This in turn, would make succession planning even more important to make sure the farm will be able to prosper, even when changing hands. It may even entice younger generations to show more interest in taking over the family farm. If there is more than one son or daughter that is interested in the farm, it is vital that there is a plan in place far in advance as things may not be as straight forward as if there was only one person who planned to take over the farm. Overall, today was an amazing day. We learned a lot and enjoyed our first day in Iowa! We can’t wait to see what’s next to come!

Cheers,
Bernard, Natalie, Will and Havie