After leaving Lincoln, Nebraska, our group travelled the short distance towards the town of York, Nebraska. The fifty-minute journey included the stereotypical Nebraska scenery of large-scale corn operations. Central pivot irrigation dominated the landscape as the Ogallala aquifer allows producers to almost an unlimited supply of water to support their crop production. A few miles outside of York, a Corteva research and corn seed processing plant, as well as a neighboring ethanol plant, Green Plains Inc. were the stops of the day. Despite corn being a major component of both production systems, each company is facing different realities with their respective marketing efforts. Corteva, recently evolved with the result of a merger between a large seed company and chemical company, resulting in an increase of opportunities with more assets and less cost throughout the organization. On the contrary, Green Plains Inc. is suffering with major declines in export opportunities as government intervention has created complications. With these organizations being located on either end of conventional corn production, it’s crazy to believe the drastic difference between the current situations of the two organizations.

Corteva: The Heart of Nature

Corteva is a young budding company recently crafted during the merger of Du Pont, Pioneer and Dow. The York, Nebraska location specializes in the breeding of hybrid corn and soybean plants in addition to the distribution of commercial seed corn throughout North America. This facility is staffed with 83 full-time employees with the addition of three-thousand seasonal part time employees. Their seed corn breeding requires the company to stay on the forefront of innovation to meet their consumers growing expectations and standards. 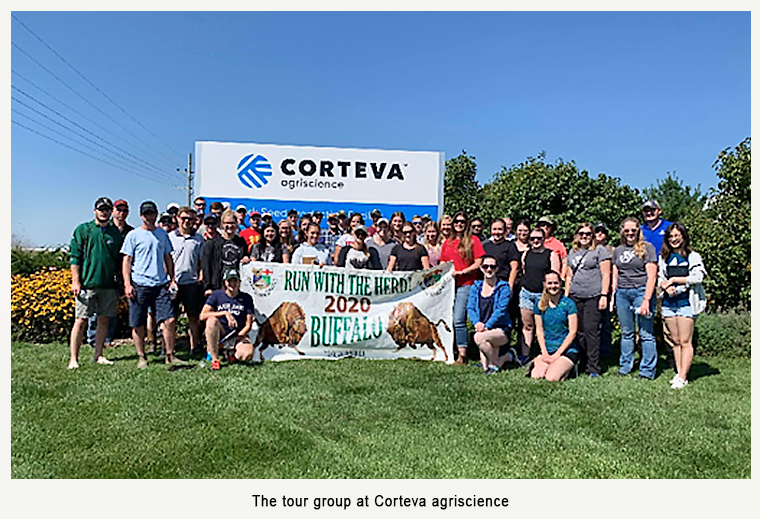 The seed corn harvesting process is significantly different than conventional corn harvesting due to the expense of this hybridization process and the delicate nature of grain for seed. The corn is harvested as a full ear at around 36 percent moisture to mitigate risk and the variability of growing to full maturity in the field. In order to maintain the safety of the workers and speed up the process of unloading, trailers with moving floors rather than hydraulically lifted trailers are used. All movement around the plant is done with conveyers to limit the damage to the product rather than using auger systems. Once unloaded the ears are conveyed underground from the dump zone to husking machines. After the cobs are husked, they are run through either robotic or human sorting lines to eliminate the off-type cobs. This facility just recently implemented six sorting robots, and each can do the work of six people. Although the machines are more efficient than the human sorting lines, total automation would cost too much for their benefits. After being sorted, the product moves to the drying bins. A slow drying process with both top and bottom drafted air is very important in order to maintain the germination of the seeds. When the product dries down to 13 percent moisture the kernels are separated from the cob and sorted by colour sorting and gravity machines to keep only the best product. The colour sorting boxes remove off coloured kernels, most frequently to separate yellow dent and white corn that may have become contaminated. The gravity boxes remove lighter kernels, primarily insect damaged kernels that would have poor germination. In this process the seed is also sorted based on seed size and shape. These qualities have little impact on germination or seedling vigour, but are separated to make seeder calibration easier. From there, most of the seeds are coated with different seed treatments, these treatments are usually insecticides or inoculants that give the seeds a better chance of survival once planted. After being treated they are packaged in bags or proboxes. The facility provides the option of bags containing a single unit at 80,000 kernels or a bulk box which contains about 4,000,000 kernels or 40 to 50 units based on seed size. As farmers we are always looking for a product that is the best for us, having the ability to tour this facility gave us an understanding of the work that goes into each different corn variety to ensure it is a top product.

Green Plains is the fourth largest cattle feeder in the US, as well as a very large producer of ethanol. The company currently owns thirteen ethanol plants in nine states producing varying qualities of ethanol. 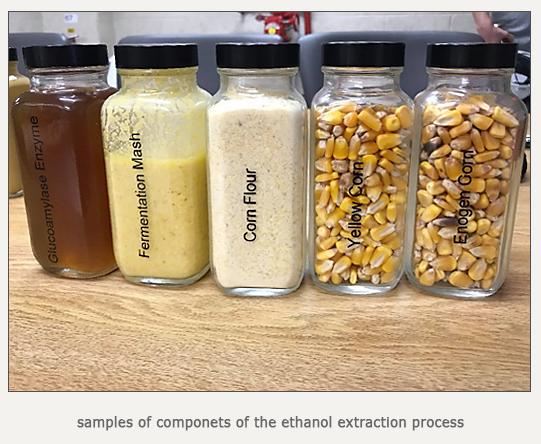 The difference would focus on the processing of grain corn to become feed products that are currently considered by-products. This change has been pushed by challenges that come along with selling to international markets caused by trade issues with China and tariffs into Brazil, as well as exemptions for small refineries blending ethanol into gasoline in the US. Resulting feed products are expected to compete with soybean products as higher protein feeds. This will allow these feed products to be used in poultry, aquaculture and swine feed as well as the existing cattle feed market for the DDG(dried distillers grain) by-product.

At our stop we learned that the ethanol extraction process begins with grade two yellow dent corn, brought in from locally contracted farmers and elevators as well as elevators owned by Green Plains. The corn is stored in one of three 80 000-bushel storage bins on site. The fourth bin is filled with enogen corn, which is a genetically modified yellow dent variety that includes an enzyme that helps with starch to improve sugar down in the fermentation process. 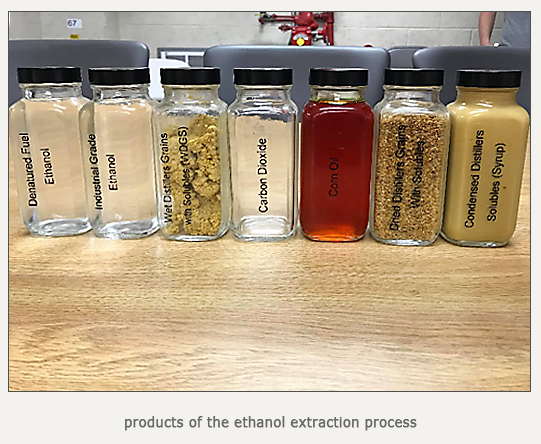 These two types are blended into hammer mills to be ground into a fine flour at a rate of 9:1 regular yellow dent to enogen yellow dent corn. After the flour leaves the hammer mill, it flows into a tank with hot water, and a series of enzymes are added to create a porridge textured mixture that breaks down starches in the flour to expose simple sugar molecules. Blocks of yeast are added to the tanks. As the yeast dissolves it becomes active and feeds on sugars in the solution, giving off carbon dioxide and alcohols. This “beer” solution is pumped into fermentation tanks where CO2 rises to the top of the tanks and is cleaned and released into the atmosphere. From the fermentation tanks, the solution is pumped to a beer column. The heated mixture runs across the slanted trays in the column that separate solids from liquids that evaporate through the top of the column. The resulting product is 90-100 proof. This process is repeated in rectifier column as well as the addition of ceramic beads to remove water, resulting in a 200-proof ethanol product that is pumped to storage tanks. The ethanol is shipped to an exporter that finds and delivers it to an industrial end user. About one third of the grain become ethanol, one third carbon dioxide and one third DDG (the feed product).

Today’s tours showed us that corn does not have a single end use but, it is a multi-faceted product and through processing it becomes a value-added commodity. From the tours we have enjoyed this week we have heard from many industry leaders that the corn industry is unpredictable. As we learned through our talk about the US Farm Bill with Kevin Brooks the ethanol industry is at a plateau for demand. This plateau for ethanol demand is pushing the company to redefine itself and its end products by creating a higher protein distillers grain. We also saw this in Des Moines at the John Deere plant where they are using carbon fibre instead of steel in the boom wings of their sprayers. The creation of value-added products allows producers to use new advancements and receive the most for their products. With larger companies buying out smaller ones, a monopoly effect is prevalent in more areas with different technologies being controlled under certain companies. The future of the ethanol industry will be in the hands of a few large companies that will buy out single plant owners.

Recently on the tour, many producers have been rewarded for taking major risks within agriculture, whether they were prepared to take the opportunity or not. Both locations today have taken major risks and have overall benefited from the decision. Green Plains Inc. entered the ethanol production industry during the infancy for applicable uses of ethanol; while Corteva, being a company created because of a massive merger of major agricultural companies. This risk-taking action aligns with previous tour locations including Nichol’s beef genetics and Whetstine hog operation. These locations understood a potential opportunity that would separate themselves from either their neighbours or competitors and took full advantage. Whether it’s changing the conventional beef operation, joining a cooperative to produce your own swine, entering an unknown industry or merging with established companies, each consideration was a calculated risk that their peers may not have agreed with, but was made anyway. The potential benefits of performing these risks have been demonstrated by these operations as everyone has benefited in the long run. These success stories should encourage young people in agriculture to jump at the opportunities they feel will be successful, without worrying about public opinion. Going against the traditional methods can cause a positive movement within any industry including agriculture, creating a successful financial outcome for the decision maker.

As our trip leads towards Norfolk, Nebraska, we can contemplate conflicting opinions about the future of our industry. Speakers have beliefs that twenty percent of small farms and poorly managed farms in America are expected to dissolve within the next five years. Despite sounding bleak, the majority feel that our generation has great opportunity to impact agricultural practices. These producers demonstrate excitement about advancing technology and creating opportunities that will completely change the industry. With the backing of these professionals positively reinforcing our future, our generation has the ability to create new boundaries in the agriculture and food production industries.