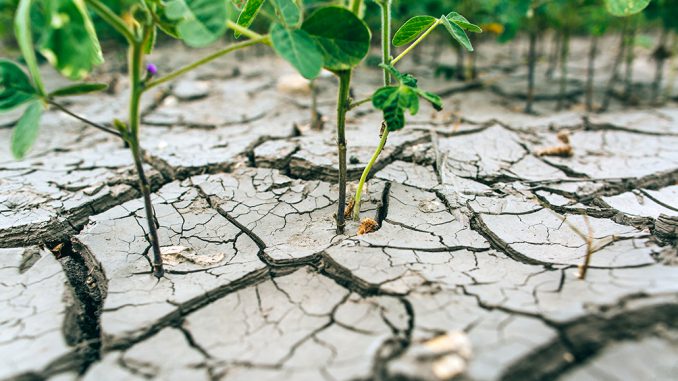 EVEN IN A wet year, if soybeans don’t get rain in a critical week, that water stress shows during harvest. However, some varieties seem to fare better than others, and researchers at the University of Guelph intend to identify the root cause.

Dr. Hugh Earl, a researcher at the University of Guelph and the chair of the Department of Plant Agriculture, has been on the assignment for three years now. He is an expert in soybean plant physiology and he has a theory that some root structures which are better at resisting the impacts of water stress, yield better. Beginning in 2015, he set out to specifically identify the functional traits of soybean roots which produce a bigger crop in those years without timely rains.

At first, the project was plagued by technical problems. But, once the team had established the best potting mix for soybeans growing in a one metre column was a London loam soil type, that was best when amended with granitic sand, they finally started to see water moving through the system the way it would out in the field. Then, as their soybean plants started growing, the experiment started presenting new surprises.

“The roots get to the bottom pretty quickly; about 30 days after planting,” Earl explains. “The vast majority of that root system is in the top 30 centimetres. In a field environment, all the nutrients are at the top, especially phosphorus, so it makes sense for them to be in that part of the profile. But, you also have a few roots that go down nice and deep that can access water before the first flower.”

Earl says with all the many known ways soybean yield is limited by water availability, there would only be a chance to really evaluate the impact of one, so, he set his sights specifically on flower to pod conversion.

“Flowers are never a limitation, but, if you can take a plant, give it water stress, and then pods are not aborted… that’s the phenotype we want,” he says. “Because, when you look at high yielding and low yielding soybeans, the difference is almost always the pod number.”

Knowing that pod set comes well after the first 30 days when the plant clearly had set its roots a full metre deep, Earl explains that it was very problematic when water suddenly didn’t appear to be traveling fully through the soil column anymore.

“If you just water the soil, you’ve got a soil profile that’s quite a bit wetter at the bottom and drier at the top,” he says. “You put the plant in that system and the roots actually redistribute the water. So, the same amount of water, but a lot more is up near the top and a lot less near the bottom.”

Why this happens, is really not clear according to Earl; but, it has great potential to impact soybean breeding programs that are working to produce drought tolerant varieties. Earl explains that most breeders are working to accelerate their program to get new varieties to market as quickly as possible and that means, they often want to be working on plants up to 30 or 40 days old. That doesn’t leave enough time to access plant roots for their adaptability to this soil water movement phenomenon, technically called ‘hydraulic lift’.

The other thing which they can offer soybean breeders, because of all those early troubles in establishing the right potting mix for a very tall pot, is simply that soybeans do not behave the same way in a small pot that they would in a tall one or in the field.

“In most small pot systems, the root immediately explores the entire pot volume, so, there’s no limitation in terms of root access to water,” he says simply. “If we’re talking about water stress, shouldn’t we be interested in what roots are doing?”

Although Earl’s research doesn’t suddenly make it any more practical for breeders to stop working on young plants in small pots, one soybean breeder is already looking to build on the foundations this research has started to lay for future experimentation. Dr. Istvan Rajcan, a professor in the Department of Plant Agriculture at the University of Guelph, is eager to start analyzing soybean genotypes and delve deeper for more insight into drought resistance characteristics with Earl.

“Dr. Hugh Earl’s previous research has already shown there are differences among the soybean varieties in their ability to take up water, and utilize it to produce more dry matter and thereby yield,” Rajcan says. “I’ve been collaborating with many researchers, I’ve never had a specific project with Hugh, but I’ve always wanted to collaborate with him. This is an opportunity that I expect my students will be learning a lot about crop physiology from this research, and we are hoping that they will be learning about the genomic selection that we will be doing.”

Rajcan explains that a recent Natural Sciences and Engineering Research Council of Canada funding announcement, which awarded nearly $1.7 million over five years to the collaboration, in partnership with CanGro Genetics Inc., will allow both researchers to evaluate hundreds of soybean genotypes for correlations between yield, oil content, protein, disease resistance, as well as drought tolerance. Rajcan says that Earl’s expertise will be of particular importance to research partners in the Ukraine, as a fast-growing market for Canadian soybeans, where precipitation is even less than it is in Ontario most years.