MANY ONTARIO AGRICULTURAL College (OAC) alumni list the Midwest crop tour as a highlight of their time at the University of Guelph. When the 2021 trip was cancelled due to COVID-19 travel restrictions, current students were understandably disappointed. But for one group of fourth year Aggies, disappointment turned into a new kind of adventure.

Scott Moore, Zach Buchanan, and seven of their OAC 2022 classmates put their heads together to come up with a way to expand their knowledge and visit farms in-person without the traditional course. They landed on a plan to buy a passenger van, tow a trailer, and drive to the west coast of Canada.

“We waited most of our university career to go on a trip together so we didn’t want to miss out on the opportunity completely,” says Moore. “The whole point of the crop tour course is to see different geography and different types of farms and we figured we could still get that if we travelled across Canada.”

TRIP PLANNING
The group mapped out a route to British Columbia and back and then planned a series of agricultural tours. They made connections in each province by contacting relatives, summer employers, recent OAC graduates and farmers they follow on social media.

“Our trip was packed full of tours and we saw a lot in a short period of time,” says Buchanan, noting that many of the stops were mixed farming operations of varying scales.

Moore used Twitter (@ScottyMoorezy) to post updates and share pictures during their 16 days away. He estimates a third of the tours were focused on the grain sector.

WESTERN HIGHLIGHTS
The group toured McIntosh Farms in Lac du Bonnet, Manitoba on the second day of the trip. The farm specializes in growing seed timothy and rye grasses as well as spring wheat, soybeans and canola.

“Some people might not think of eastern Manitoba as the prairie but we saw that it is quite dry,” says Moore. “We learned how different yields and income can be each year in a variable climate.”

From a management perspective, their host explained how he looks at long term records rather than year over year data to assess profitability and plan.

Visiting a large crop and feedlot operation near Turin, Alberta was a highlight for Buchanan. Serfas Farms Ltd. dedicates 12,000 acres to corn silage and runs another 53,000 acres of canola, wheat and barley. The farm is also located in an area that was significantly impacted by drought in 2021.

The host brought the group to a 3,000 acre field where 10 combines were harvesting canola. Each of the students were able to ride in a combine and talk to the operators — a unique learning opportunity that wouldn’t have been possible on the larger crop tour trip.

“There was one X9 and the others were also brand new John Deere combines,” says Buchanan. “It was astonishing to see the scale of the operation because we have nothing like that in Ontario.”

LESSONS LEARNED
Moore says they learned a lot from OAC alumni Alan Abdulkader and Matt Fletcher, who currently work for BASF in western Canada. The group discussed new harvesting practices for canola as well as breeding goals and current research trials. They also learned about clubroot, a serious soil-borne disease of cruciferous plants.

After expanding his knowledge of the canola crop, Buchanan is excited to see how winter canola progresses in Ontario. “It could be a really cool opportunity to add a new crop into our rotation,” he says.

A grain farm tour in southern Saskatchewan also impacted him. It is an area of tough ground where no-till and long rotation practices are common.

“The farmer we met mainly had native grasslands but where he was farming, there was only an inch or two of topsoil,” he says. “Seeing that really stuck with me because we are taking the deep topsoil we have here for granted.”

Diversification into other sectors or niche markets was also a theme across many of the farms toured. It got the nine students thinking more about the future of agriculture and the opportunity to farm differently.

Thanks to Moore’s presence on Twitter, many OAC alumni followed along with the trip and shared memories of their own fourth year experiences. The group was congratulated on persevering and taking the initiative to plan their own tour within the COVID-19 guidelines. • 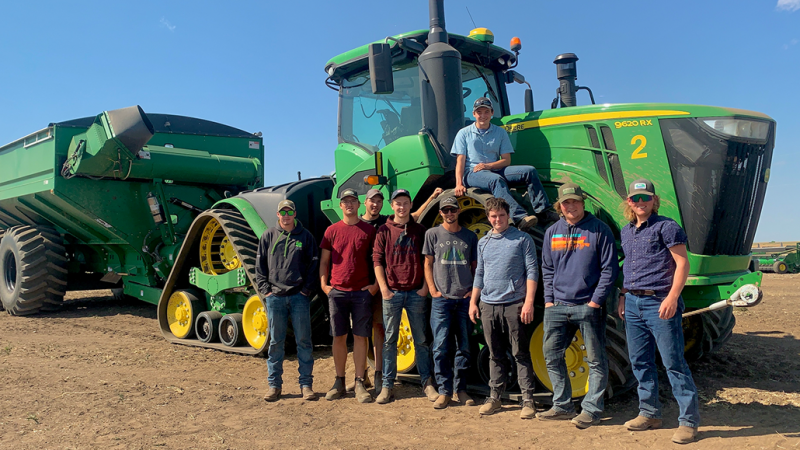 Read the article in the Ontario Grain Farmer.