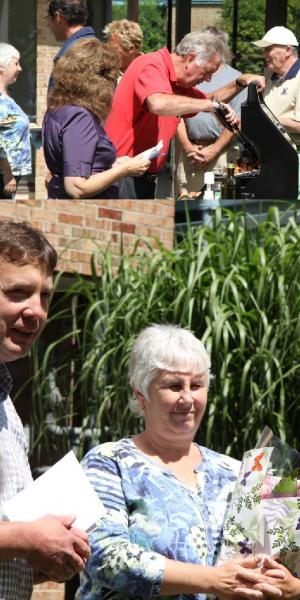 Members of the Plant Ag Department from Simcoe, Vineland and Guelph as well as OMAF personnel from Simcoe gathered on Tues, Aug 13th for a barbeque in celebration of Deborah Norton’s upcoming retirement.

Debbie started with OMAFRA/ Horticulture Research Institute of Ontario ay the Vineland Research Station in 1980 as a “Lab Tech in Plant Nutrition” and became an employee of the University of Guelph in April of 1997. Since 2003 she has worked with John Cline’s program in orchard management. An interesting fact is that she worked for John Cline’s father at the beginning of her career with HRIO.

The barbeque featured skewers of vegetables and chicken, salmon or shrimp prepared by John Cline as well as corn and salads of various kinds and pies for desert.

Wally Andres spoke of his appreciation of Debbie’s accommodating work ethic. John Cline emphasized the enormous skill and dedication that that Debbie, and all technicians, bring to the research being conducted in the Department and thanked her for the important role she has played in his program.

In her comments, Debbie mentioned the large changes her job has undergone. She illustrated the changes in her job from 1980 to the present by showing pictures of some equipment that was commonplace in offices when she started: telephone switch boards, Gestetner machines and Wang computers. She indicated her appreciation of all of the supervisors and colleagues she has worked with.

The event was a wonderful chance to celebrate the contributions that Debbie’s work has made to orchard production in Ontario and the friendships she has made in her career.