The major emphasis of the research program is the identification of physiological and genetic factors controlling whole plant development and the interaction between these factors and the environment with the goal of increasing the profit margin of greenhouse vegetable production through:

The lab has developed and is testing a hypothesis called the "diel growth cycle interaction hypothesis" with the goal of providing a unifying theory for the control of whole plant development. Diel is a term referring to the combination of the day time (diurnal) and night time (nocturnal) growth periods of an organism. We have obtained evidence that different plant parts show varying diel growth cycle patterns, and that these varying patterns can interact with each other to effect the growth and development of particular organs. For example, through the use of plants genetically altered in carbohydrate metabolism and whole plant development (e.g. transgenic tomatoes having increased sucrose synthesis ability in the day and altered flowering and fruiting, mutants of Flaveria linearis with decreased ability to produce sucrose and altered lateral branching) we have shown that patterns of diel carbon export are affected in these genetic variants and there are corresponding changes in diel growth cycle patterns for different plant parts. In the case of the transgenic tomatoes, diel carbon transport is shifted so that more carbon transport occurs during the day period, and there is correspondingly more lateral branching since the diel growth cycle for lateral branching is superimposed less onto main stem expansion (i.e. a diel growth cycle interaction has occurred). This altered lateral branching then affects flowering, fruiting, and harvest index as shown in Fig. 1 below.

This hypothesis is being pursued in an integrated fashion at the molecular, cellular, and whole plant levels using a variety of experimental approaches. These approaches include the generation of transgenic plants and isolation of mutants affected in carbohydrate metabolism and other processes, and the physiological and molecular analyses of such genetically altered plants using gas exchange techniques, monitoring of transport and metabolism of radiolabeled compounds, metabolite analysis using chromatography methods and procedures such as non-aqueous fractionation, isolation of affected genes, study of differential gene expression patterns, and the analysis of developmental parameters and their interaction with the environment.

The lab is testing the hypothesis that carbon transport is altered under low light conditions such that less carbon is transported to reproductive tissues under low light, thus reducing the harvest index. As an extension of work described in (1) above, the lab has found that interactions between carbohydrate metabolism and harvest index are affected by environmental conditions such as light. The work has indicated that under low light, the transport of carbon to reproductive sinks becomes a bottleneck for productivity. Various mutant selections using EMS mutagenized tomato are being executed to find genetic variants in this response, and the response is being tested using a variety of physiological measurements as mentioned above.

The use of seedless tomatoes, peppers, and eggplants to improve productivity under low light is being examined. Recent studies in other labs have shown that seedless eggplants generated by altering auxin metabolism in the fruit show 25% increases in yield under low light, possibly because the requirement for pollination and fertilization (two processes affected by light) has been eliminated. Such genetic variants are being tested, and we have isolated a number of tomato mutants affected in their seeding behaviour that do produce fruit. The genetics and physiology of these genetic variants are being analyzed.

The feasibility of supplementing greenhouse vegetables with a carbon source in the hydroponic solution under low light is also being tested. Preliminary work has shown that applying an external source of carbon to tomatoes increases their branching, flowering, and fruiting in an analogous way to the transgenic tomatoes shown in Fig. 1 below. 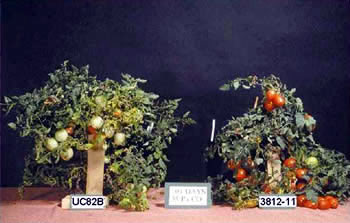 Cultivars bred in Israel and Italy are being tested under different temperature regimes to determine their responses at lower average temperatures. Preliminary work has shown that some of these varieties respond better at lower average temperatures compared to traditional Dutch-bred cultivars. The basis for these findings is possibly because breeders in Israel and Italy use non-heated greenhouses during their selection procedures. The physiology of these cultivars is now being tested.

A mutant selection to find tomatoes with altered responses to lower average temperatures is also being implemented.