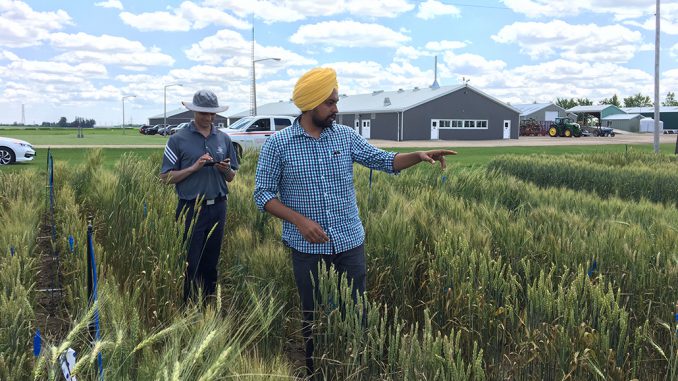 DEVELOPING NEW WINTER wheat varieties that are better able to resist Fusarium head blight (FHB), a complex and stubborn disease that can destroy whole crops, is the goal of the research efforts of Dr. Ali Navabi and his team at the University of Guelph.

“We’re introducing novel plant breeding materials, testing them for resistance against the disease and suitability for Ontario conditions, then using them in making crosses to Ontario-adapted varieties,” he says. The idea is to come up with a variety that can weather this province’s climate and better fight off FHB.

Navabi is an associate professor within the Department of Plant Agriculture at the University of Guelph, and holds the Grain Farmers of Ontario Professorship in Wheat Breeding.

FHB, also called scab, is a fungal disease that affects small grain crops such as barley, oats, and wheat. It is devastating in that it reduces yields, grades, and the quality of the grain’s end use, and also produces toxins. Ontario’s moist, humid conditions are conducive to the onset and spread of the disease.

The project, which started in May 2014, actually has three components. The first is variety development, the second is characterizing genetically-diverse winter wheat materials at both the molecular and field level, and the third is an inheritance study of FHB resistance in wheat.

Over three-and-a-half years, researchers worked on 450 winter wheat accessions (distinct, identifiable samples of seed) that were collected from across Canada, including Ontario, Manitoba, Saskatchewan, and Alberta, and from as early as pre-1900.

“We wanted to capture the Canadian winter wheat’s genetic diversity, both geographically and historically,” Navabi says.

The “Canadian Winter Wheat Diversity Panel” as it’s called, was developed by PhD candidate Harwinder Singh Sidhu and is the basis of his thesis.

The seeds were planted in research plots, infected with the disease, and subjected to an environment that encouraged its growth. Then, they were monitored through the year and data was collected and recorded about how each line was performing in the field.

Samples of DNA were also extracted from each of the same 450 lines and genotyped for the presence of genetic markers (small pieces of DNA with known location), used in studies of genetic diversity. Every sample was tested for a total of around 90,000 different DNA markers.

“We now have very rich datasets of genetic information and field performance data on how these lines perform against FHB,” Navabi says.

Helping with the massive job in the plant pathology laboratory was post-doctoral research associate Mitra Serajazari.

Besides collecting the data, the researchers also compared the field and molecular markers and have been finding markers that are linked to genes that contribute to resistance to the disease. These can then be used in selecting varieties with higher levels of disease resistance.

They’ve also produced at least 150 crosses of selected genetic materials each year. Normally, actually arriving at new varieties takes many years, from the time the cross was made.

“In plant breeding, you need to go through multiple generations to reach a certain level of genetic purity,” Navabi says.

To speed up the process, he and his team came up with a new approach to growing and testing the new plants. Now, they’re able to advance breeding materials two and a half generations a year. A total of 4,000 lines out of these crosses were planted in research field plots in the 2016 – 2017 crop year. These were tested for agronomic traits like yield, test weight, and plant height.

The idea is to produce at least 4,000 lines of these new breeding lines every year, gathering data, testing, and refining the varieties for FHB resistance.

Close to $1 million in funding for the project came from Growing Forward 2 (GF2) and SeCan, Canada’s largest supplier of certified seed.

“We saw that there was a lack of breeding activity in Ontario in winter wheat, and we thought Guelph was an ideal location,” says Jeff Reid, general manager for SeCan, which currently has 74 member companies in Ontario.

Reid characterizes FHB as the ‘biggest single production challenge farmers face in Ontario and eastern Canada,’ which was why the company invested in the project.

Both Reid and Navabi are cautious about predicting major research breakthroughs.

“It’s a tough nut to crack,” says Reid. “Realistically, the results will be gradual and incremental — even marginal gains in finding genetic markers that identify resistance to the disease will help down the road.”

In terms of preventing the disease, Navabi has some advice for farmers.

“Planting more disease resistant varieties is the first choice, but there are also other approaches such as good crop rotation: not planting wheat after wheat, or wheat after corn, scouting the fields, and using fungicides if needed,” he says.

While the GF2 project is completed, Genome Canada has taken up the cause and is now funding Navabi’s research into FHB resistance in winter wheat.

This project was funded in part through Growing Forward 2 (GF2), a federal-provincial-territorial initiative. The Agricultural Adaptation Council assists in the delivery of GF2 in Ontario. •